Towards the European Model of Postgraduate Training 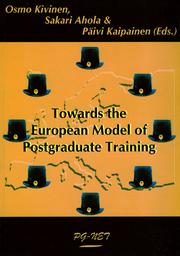 In the name of the information society and international competitiveness, governments are promoting the production of highly trained labour and R&D activities. During the 1990s, the number of PhDs has increased rapidly in all OECD countries. This book offers an overview of European postgraduate expansion and the problems relating to it in the eight countries — Finland, France, Germany, Hungary, Italy, the Netherlands, Portugal and the United Kingdom — which, co-ordinated by the Finnish Research Unit for the Sociology of Education (RUSE), have established a European Postgraduate Network.

The country reports show that, despite the notable differences in the scale and practice of national postgraduate systems, the basic rationale for the development of graduate schools is similar. In any case, the trend towards overall harmonisation is gaining ground in European higher education. Now it is time to ask: could the American graduate school model that has been imitated in Europe revive the old Humboldtian tradition of learning through research?