Natural Personalism. A Secular Rearrangement of Catholic Themes in Bioethics 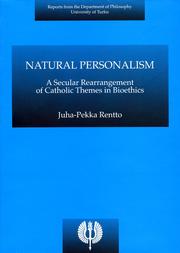 This book is an attempt at giving a secular twist to that which can bee loosely characterised as the Roman Catholic approach to bioethics. It identifies the Aristotelian-Aquinian background philosophy which is implicit in the catholic bioethical statements and, after a defence of moral essentialism against the moderns, explicates its basic tenets with the help of texts written by catholic-minded authors. Discussing the original ethical and political theories of Aquinas and Aristotle, it reconstructs a unified theory of natural personalism which as consistently as possible - and without recource to theological arguments - would answer to the central bioethical concerns with which a catholic mind tends to be preoccupied.

The book applies the theory of natural personalism fo a few major topics which are among the favourites in the official proclamations of the Vatican: (i) divorce and the indissolubility of matrimony, (ii) the right of children to be born in wedlock (including the problem of assisted reproduction), and (iii) the twin problem of abortion and euthanasia. In each case, the moral position of natural personalism is discussed in comparison to the official Catholic proclamations, and possible political solutions are offered to a natural personalistic lawgiver.