Perception in Kant's Model of Experience 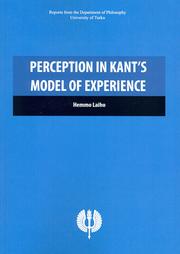 In order to secure the limits of the critical use of reasons, and to succeed in the critique of speculative metaphysics, Immanuel Kant (1724-1804) had to present a full account of human cognitive experience. Perception in Kant's Model of Experience is a detailed investigation of this aspect of Kant's grand enterprise with a special focus: perception. The overarching goal is to understand this common phenomenon both in itself and as the key to understanding Kant's views of experience. In the process, the author argues against any such reading of Kant that puts to much emphasis on concepts and understanding in perception. This means that claims of the sort that intuintions cannot play their role without concepts, that sensibility cannot bring anything to cognition without being mediated through the functions of understanding, or that there is no such thing as concept-independent perception, are shown to be either plainly false of misleading at best. Together with the contemporary topics examined by the end of the book, the findings suggest how the role of conceptual thinking in human cognition has been exaggerated partly because of a misplaced interpretation of Kant, which not only makes perception far more intellectual in character than what was intended by Kant himself, but distorts Kant's account of cognition by overlooking what there is at the heart of his citical philosophy: the revaluation of sensible cognition.