Congregation of the Elect: Patterns of Self-Fashioning in English Lollard Writings 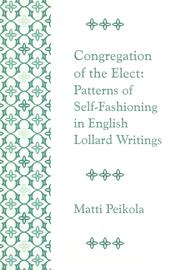 This study approaches the Late Middle English writings of the Lollard (Wycliffite) movement from a discourse perspective. It explores those linguistic means whereby Wycliffite writers construct themselves and their implied audiences as a distinct community of true believers. The investigation focuses on a large number of collective terms used by the writers for their self-labelling (e.g. trewe men, trewe prechours, pore men). By examining semantic and collocational nuances of such terminology, the study further develops the notion of ‘Lollard sect vocabulary’, originally presented by Hudson in 1981. The qualitative analysis is based on a large electronic corpus of Wycliffite and contemporary orthodox control material, compiled by the author.